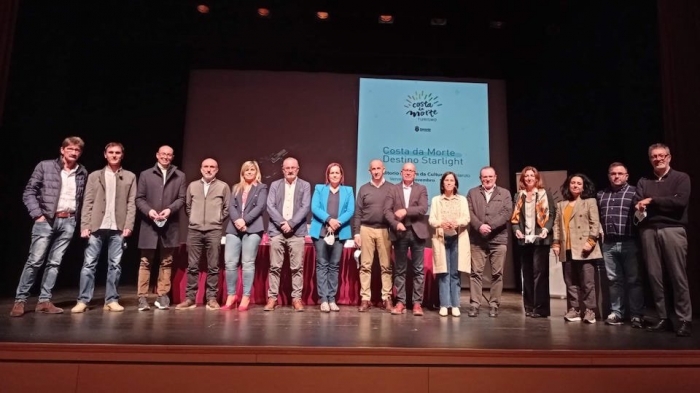 On Friday 19th November, a technical conference was held at the Casa de la Cultura in Vimianzo to explain the implementation, by the Costa da Morte Tourism Association (CMAT), of a project that will promote this territory as a Starlight Destination and will highlight its suitability for enjoying astro-tourism experiences.

The top representatives of the 17 town councils of the Geodestino Costa da Morte, the employers, the Deputation of A Coruña and several scientists were present to discuss the benefits that the certification of the Costa da Morte as a Starlight Destination would have for the territory. The region has a spectacular sky, with little light pollution, transparent air and clear skies.

We were also able to listen to Ana Teresa Cimas Hernando, head of the Provincial Tourism Department of Galicia, who stressed the importance of positioning Costa da Morte as a unique destination under a single brand. She stressed that in addition to the Starlight Destination certification, we have to go all out, the companies in the sector have to unite and create specialised services in star tourism. In Galicia we have three certified destinations: A Veiga, Illas Atlánticas and Muras; it does not go unnoticed that Costa da Morte would be the first Starlight destination in the province of A Coruña, and with it, Galicia would be the second destination in Spain with the most certified places for star tourism".

Finally, Xosé Regueira, Vice-president of the Deputation of A Coruña, expressed his full support for the project, since "projects such as Starlight are consistent with the intentions of the Deputation of A Coruña". He also considers that it is "an element that will diversify the product in the geodestination and also allow the selection of a quality tourist profile". He also stressed that it is a "sustainable, responsible and innovative" product that will serve to "deseasonalise and increase the average stay in the destination".

The list of actions to be carried out is now beginning. If it starts in January, by the middle of the year we would have the resolution of whether Costa da Morte is a Starlight Destination. It is important to take into account the list of improvements to be implemented, as well as to remember that the Starlight seal is renewable, so it is essential to raise awareness about light pollution and the right of everyone to see the stars.