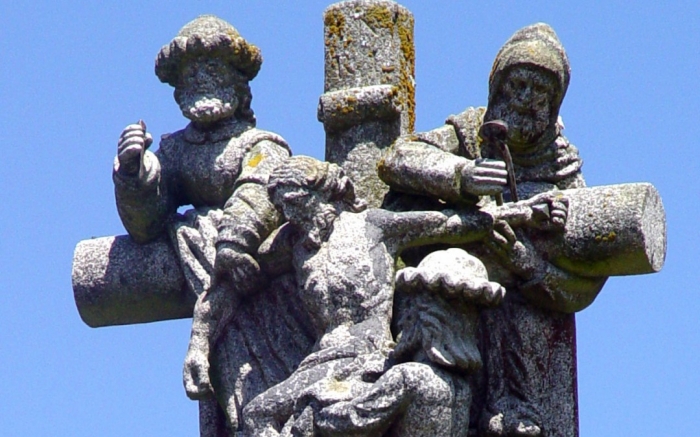 Stone crosses are a common sight in the Galician countryside and towns. They sanctify the places where they stand, frequently in the atrium of a church, in cemeteries, on marked paths or on the boundaries of parishes and councils. They are sacred objects, not just statues and they were erected as acts of devotion by those who wished to gain favour and divine protection for their parish or for themselves. Nowadays, the religious symbolism is losing importance and they are often erected for purely decorative purposes.

They have several different, distinct parts: the base, an elevated platform of various steps and a pedestal; this supports the column and then there is the capital which may have a wide variety of religious motifs; and of course there is the cross, the most fundamental part.  It is in this part that you can see a representation of the Descent of Christ over five stone crosses. Four of these are in the province of A Coruña, all close to the town of Noia. The fifth and most famous is in the province of Pontevedra. You can see stone crosses dotted all across Galicia.