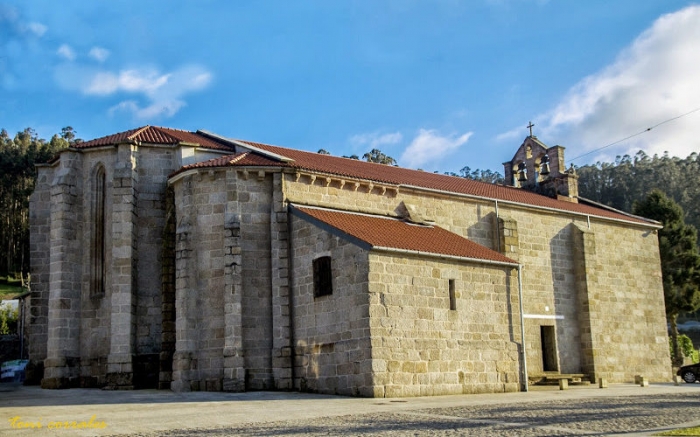 The data available on the origins of the monastery indicate that it was founded in the first quarter of the 10th century. According to the historian LópezFerreiro, there is a document in the indices of the archives of San MartiñoPinario relating to the Soandres Monastery. It was the home of Bishop Don Nuño and the document references a sentence handed down in the year 922 A.D. in Soandres with Count Froilán Menéndez.

Lucas Álvarez claims the monastery was founded by the parents of CondePelayo, who made a donation to this church as attested in documents dating to 990 A.D.

Since its founding, this Benedictine monastery played an important role and exercised great influence over a large part of what is now Bergantiños.

For four centuries, until 1351, the monastery at Soandres was under the patronage of San Salvador. It was then that the King of Castille, Pedro I, in a declaration of the protection which he bestowed the temple, decided to exempt the monastery from harvest taxes. As a show of their gratitude, the monks changed the dedication of the monastery to that of San Pedro (St Peter).

The monastery began to lose its influence in the late 15th and early 16th centuries as a result of the reformation by the Catholic Monarchs. The monastery became a priory under the control of the Monastery of San MartiñoPinario de Santiago de Compostela, a union confirmed by Pope Alexander VI on 1st October, 1500.

Monastic life came to an end here on the 6th December, 1835. The monastery lost its possessions and since then its use has been limited to that of the local parish church.