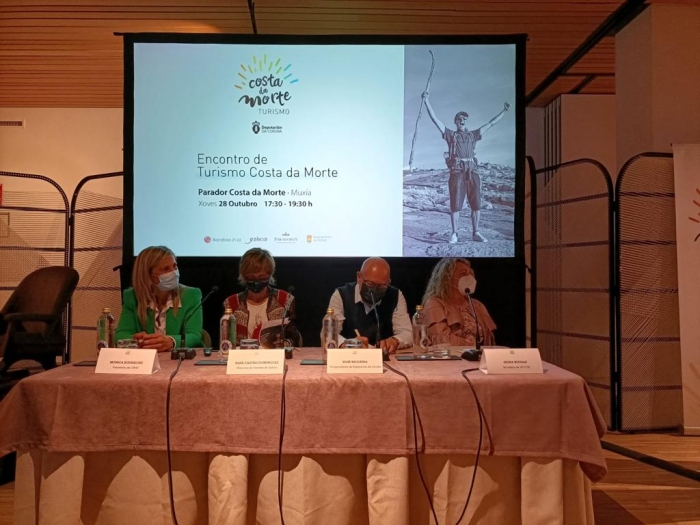 The Parador Costa da Morte hosted yesterday afternoon the Costa da Morte Tourism Meeting, where city councils, Diputación da Coruña, Xunta and tourism companies discussed the potential of the area as a geodestination and opted for collaboration in the field of tourism.

The report "The Way Continues" was screened, which will be used to promote the area on online channels and at international tourism fairs.

The local administrations of Costa da Morte, the Diputación da Coruña, the Xunta de Galicia and the representatives of the private initiative linked to the tourism field set themselves an objective yesterday at the Costa da Morte Tourism Meeting held at the Parador Costa da Morte in Muxía: to work in coordination and together in the tourism promotion of Costa da Morte to turn this territory into a reference destination. Mónica Rodríguez, president of the Costa da Morte Tourist Association (CMAT), the driving force and promoter of this meeting, which aims to continue in the coming years, thanked the "unconditional" commitment of the different public administrations to the project for the promotion of the Costa da Morte and, likewise, pointed out the leading role of the tourist companies to "bet on the potential of the area as a tourist geodestination". The private initiative was represented by local companies and associations, travel agencies and hotel chains from both Costa da Morte and the entire Autonomous Community.

The Costa da Morte Tourism Meeting began with a welcome from the Mayor of Muxía, Santiago Toba, who acted as host. He thanked those present for their interest in this initiative. Marta Rodríguez, a member of the CMAT Technical Secretariat team, presented the objectives. "We want the Costa da Morte to be a reference; to be an example of the collaboration of public and private initiative to promote a territory in the field of tourism".

The representatives of the different institutions also took the floor. Nava Castro, director of Tourism of Galicia, an entity dependent on the Xunta de Galicia, spoke about the Opportunities of the Fisterra and Muxía Way and the future Coastal Path for Costa da Morte. In her opinion, Costa da Morte has more than enough attractions to consolidate itself as a tourist destination of the first magnitude. Next, it was the vice-president of the Diputación de A Coruña, Xosé Regueira, who, coinciding with the arguments of Nava Castro, addressed The importance of cultural tourism in Costa da Morte, Fisterra and Muxía Way and Megalithic Park. In this territory we can find the Dolmen of Dombate, considered the cathedral of Galician megalithism, as well as numerous vestiges. This area has more than 300 mámoas, dolmens and other funerary constructions, which make up one of the most representative examples of the Stone Age in the Iberian Peninsula. For his part, the secretary of the CMAT and president of the Association of Tourism Professionals of the Costa da Morte (APTCM), dealt with the challenges and strengths of the Costa da Morte tourism business network.

After the intervention of the institutional representatives, the audiovisual report 'The Way Continues' was screened at the Parador Costa da Morte in Muxía. This documentary was recorded in the month of September during the journey that the bloggers Bo Saldaña, from ElMundoOk; Leticia Pérez, from Trucos viajeros; Eva Abal, from Una idea un viaje; Dani Keral, from Un viaje creativo; and Alberto Ribas, from Alvientooo, made along the Camino de Fisterra and Muxía and along the Costa da Morte. This report, which emphasises the tourist potential of the area, and especially the Fisterra and Muxía Way, will be used as a tourist attraction on online channels and will be screened at regional, national and international tourism fairs.  After the screening, the bloggers took part in a debate. They all agreed on the tourist "potential" of the Costa da Morte.

The president of CMAT was in charge of closing the Costa da Morte Tourism Meeting. "She thanked the public and private institutions for their commitment to the Costa da Morte. She also thanked the different administrations for the work done so far in the promotion of tourism and invited them to continue "collaborating side by side for the benefit of the municipalities of the Costa da Morte". After his speech, the attendees had time for networking, where dialogue and the sharing of ideas, new tourism products and business alliances were encouraged.