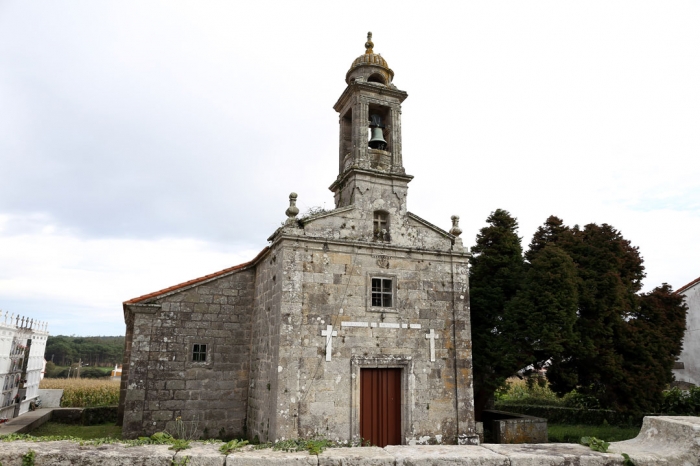 The church of Santiago de Mens is a Romanesque construction from the 12th century. Mens is a parish in the municipality of Malpica de Bergantiños, located in the region of Bergantiños in the province of La Coruña.

Construction dates back to the 12th century and was carried out in three stages.From the first, pre-Romanesque phase, the three naves still remain, divided by pillars which support round arches. The apses were built in the second, Romanesque stage and the main entrance facade was remodelled in the third stage.

The layout of the church has a basilica structure, composed of three naves divided into four sections in the original format but these were reduced to three in a reformation in the 19th century. The naves end in three semi-circular apses (lateral) and one pentagonal one (centre). The outside of the apse has half columns at four corners of the polygon. The apses have semi-circular barrel vaults and a quarter-sphere dome. The arches stand on rectangular pilasters which support a simple gabled roof. The capitals and corbels are decorated with balls, leaves, animals and human figures.

The main facade is Baroque and the central section stands proud of the lateral ones. There is a well-proportioned bell-tower above the linteled door, supported by ionic pilasters and topped with a domed lantern tower. The sides are crowned with pinnacles.