This autumn at "sete no espazo" 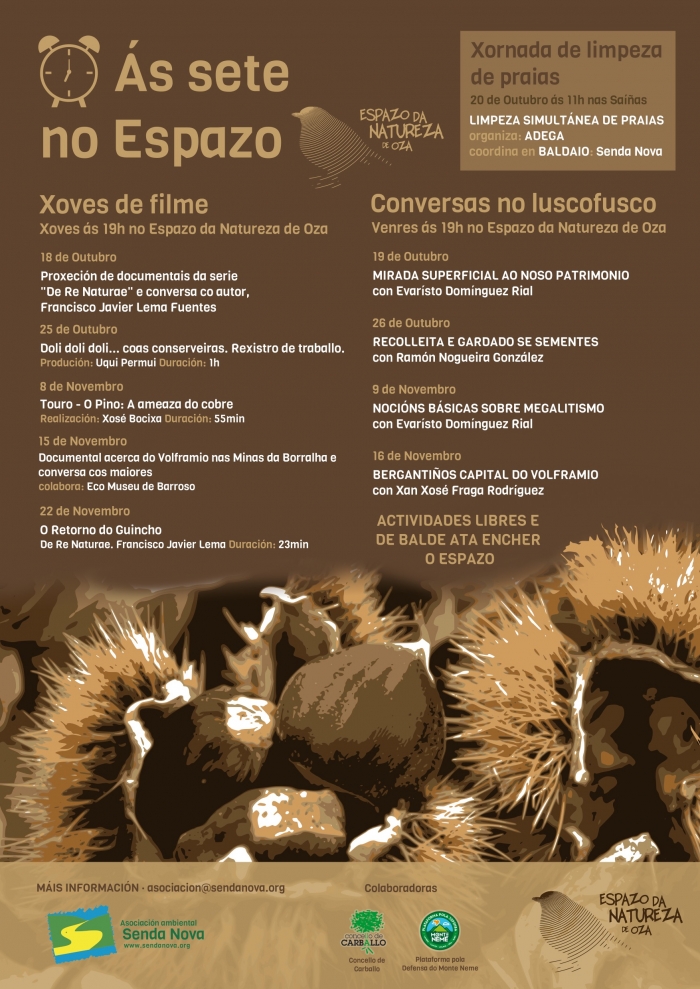 Thursday 18: Next Thursday 18 will begin with the documentary screening of the series "De Re Naturae" by Francisco Javier Lema, with which we will also count on the Space to meet him personally and know the curiosities and modus operandi of the realization of his films.

Friday 19th: "Conversations on the luscofusco" with the "Surface Look at our Heritage" with Evaristo Domínguez Rial begins on Friday, 19th, where we will speak of the heritage in an introductory way, also paying attention to aspects such as the intangible heritage.

Saturday 20: Saturday 20 will be the "Simultaneous cleaning of beaches" in Baldaio, in this case the reference time will be at 11 in the morning, starting from the Saíñas. In order to participate in the activity, you just need to notify 617197591 and optionally wear gloves to protect your hands. The Seven in Space 1As seven in Space 1

Film (25 Out): "Doli doli doli ... with conserveers. Work record ". Produced by Uqui Permui. Duration: 1h. About the role of women in conservatories and their working conditions and labor rights in one of the most characteristic industries of Galicia and our area. Conversation in Luscofusco (26 Out): "Collection and Saving of Seeds" with Ramón Nogueira González. About the methodologies for the conservation and use of seeds in our orchard.

Filme (8 Nov): "Toro - The Pine: The threat of copper." Accomplishment of Xosé Bocixa. Duration: 55m. Film that presents the case of the environmental defense of the lands of the residents of the municipalities of Touro and O Pino against the new project of the copper megamine. Conversation in Luscofusco (9 Nov): "Basic notions about megalithism" with Evaristo Domínguez Rial. In what will be discussed about the ancient period and cultural manifestation of the great stones, of which we still have many constructions that give evidence of the great activity of our ancestors and the importance and impact that it had in our region.

Within the set of activities carried out at the Volframe Week that will coordinate the Plataforma por la Defensa del Monte Neme, the program will be adapted to deal with issues related to the Tungsten and the Mine Neme mine. Filme (15 Nov): Documentary about the Tungsten in the Mines of Borralha and talks with the largest of the area. We will see the case of the neighboring Mines of Volframio da Borralha in Portugal, one of the great reserves of this strategic mineral in the Iberian Peninsula. Conversation in Luscofusco (16 Nov): "Bergantiños capital of the Volframio" with Xan Xosé Fraga Rodríguez. In which we will discuss the social and geopolitical context of our region of this key mineral in the Second World War.

Film (22 Nov): "El Retorno del Guincho" by Francisco Javier Lema Fuentes. We will count on the effort of recovery and conservation in the Iberian Peninsula of this young bird. This autumn, between chestnut and chestnut, we talked together in Luscofusco. We speak of nature, culture and society, at seven in space. All the activities of this program are free and for free and will be held at 7:00 pm in the Space of Nature of Oza (only limitation of ENO capacity) except for the cleaning of beaches that will be carried out in Baldaio with a hangout in the Saíñas.