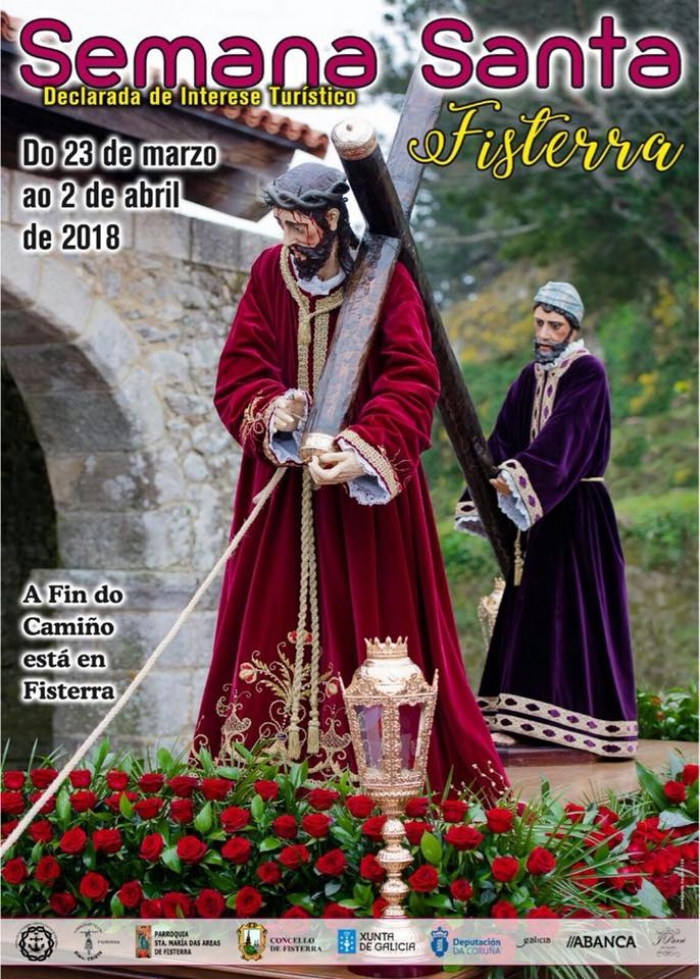 The Saint Week of Finisterre, declared as of National Tourist Interest, consists in 5 days of representations with his different representative aand liturgical acts, in which the village go back assuming each one his place and his paper to give life to the Passion, Death and Resurrection of Christ.

The villa of Christ of the Beard Dourada with ones almost 5000 inhabitants saw of Passion to celebrate his Saint Week. Some 500 penitentes, other so many bearers, organisers, living characters,... The whole village delivers to this tradition rooted from the S.XIV. A lot of people works all the year so that the images dress his best galas, the bearers, thrones, suits of the living characters, etc. The Saint Week of Fisterra treasures one of the most valuable heritages of the world, with Christ of the Beard Dourada of the s.XIV; the implication of all the fisterranos in the celebrations, the ardour with which lives in the village and the pride that feel to form part of this so intimate celebration and so universal. The tradition, the faith, the devotion, the culture and an only singularity join in the Saint Week Fisterrana. The processions are only, where the people participates from the beginning to the end, are not parades procesionales but processions in which it can participate entirely.

The Saint Week of Fisterra, definitely, is one of the biggest celebrations of all Galicia that realise in these dates. The main shot that characterises it and the difference of the others Saint Weeks that we can find in the community is that the greater part of the acts are representations realised by the own fisterráns of meat and bone, following texts of origin inmemorial, some dated of the Half Age, that deliver with ardour to the organisation and celebration of our Week of Passion, reason of pride of the fisterráns from does centuries. They are the inhabitants of Fisterra the same that represent to the apostles in the Last Dinner, in the Prayer of the Orchard, Jewish that prenden to Jesús, Marías that accompany him in the act of the Desenclavo, and the Confreries that participate dressing to his image and procesionando in close moment of the Week Passion.

It is curious, besides, that big part of the participants are young people, something that contrasts with what becomes in other villas and Galician villages, where the religious celebrations have remained relegadas to the greater people. The incomparable frame where develop the majority of the celebrations gravita around the Parish church of Santamaría of the Sands, declared Historical Monument-Artistic in the year 1985. The quality and variety of the celebrations, achieve to attract to tens of thousands of visitors, interested in the religious value, artistic and ethnographic of the events.

Each day, every year grows but the work and devotion so that the culture of Fisterra do not lose . The acts with living characters are only. Few Saint Weeks aúnan living characters with images of but of two centuries of history. It is an only Saint Week recognised in Galicia like one of the most important beside Viveiro and Ferrol that already were declared of International Tourist Interest. The people that arrives to our earths in Saint Week remains perplejo of the work, the devotion, the organisation and the participation of the people of Fisterra.

If of something this proud Fisterra is of his Saint Week and of the high degree of participation that has by part of his people. We can stand out the young people. The steps (see photos) are carried in his majority by young people that does not go up of the 35 years. Excepting the Saint Sepulcro and the Divine Nazareno that it is the Confrerie with people more greater. The rest is composed of young people that coordinates, organises, directs and carries his steps and images.