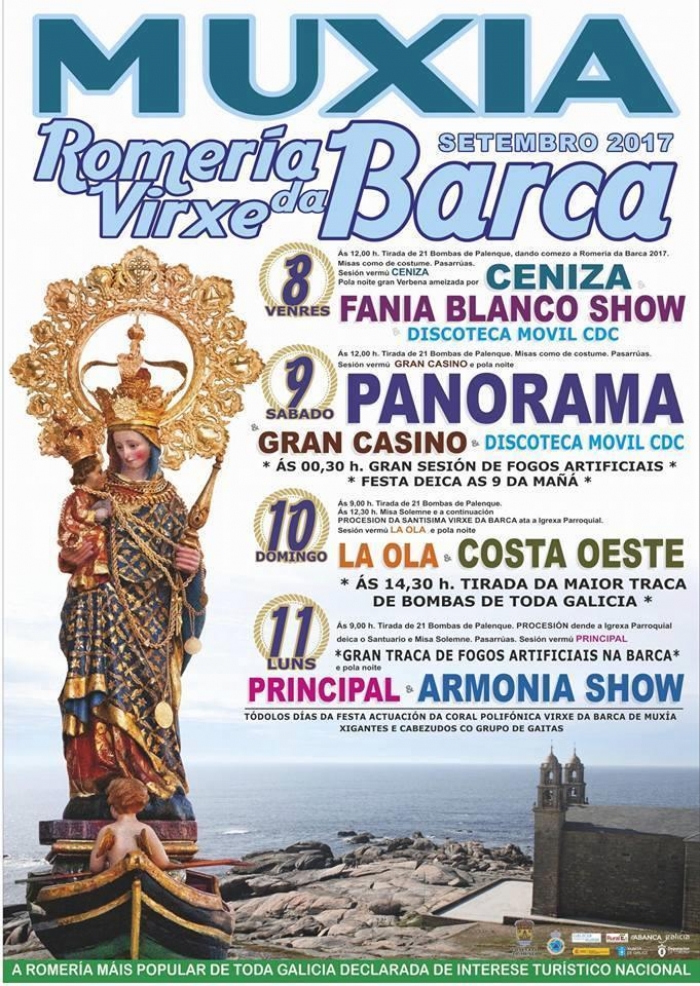 The romaría (pilgrimage / procession) to Nosa Señora da Barca, in Muxía, is one of the oldest and most important in all of Galicia. The Virgin does not offer protection from any specific ill, but her popularity is based on the fact that she grants the wishes of all those that ask in true faith. The festivities took place from the 8th to the 11th of September in 2017. The event has been declared an Event of National Tourist Interest.

Legend has it that when Santiago (St James) was preaching the gospel in these lands, in a moment of desolation brought on by his lack of success in converting the locals, he was visited by the Virgin Mary aboard a stone boat rowed by angels. This vision gave him the inspiration and courage to continue his work of spreading the gospel. As proof of this apparition, the rocks of the coast are said to be the remains of the Virgins boat. At a later time, a statue of the Virgin Mary was found underneath the (stone) rudder of the boat and it was taken up to the parish church. However, the statue inexplicably disappeared and was found back in its original position. As a result of this miraculous event, the inhabitants of Muxía decided to build a shrine to honour the Virgin.

The annual pilgrimage to the site dates back to the construction of the first chapel, back in the 11th or 12th century. The romaría has been declared an Event of National Tourist Interest. It is held over the second weekend of September with the Sunday being the culmination of the celebrations with a procession through the streets of Muxía en route to the church of Santa María, where the statue of the Virgin Mary remains until the following day.

Surrounding this church, standing overlooking the sea are numerous large rocks which were used in Pagan rituals and later Christianised: They are A Pedra de Abalar, A Pedra dos Cadrís and A Pedra dos Namorados. The worship of stones was widespread in Galicia and dates back to pre-Roman times. The Christianisation of this practice appears to have been the work of the nuns of Muxía.

"A Pedra dos Cadrís" is a must-visit for anyone suffering from rheumatism or similar ailments; they have to pass underneath the rock nine times to be cured.According to the Jacobean legend, the rock is the sail of the boat on which the Virgin Mary appeared to St James.

"A Pedra de Abalar" is a balancing rock which makes a mysterious sound as it moves. Popular belief is that the rock has a myriad of powers. The sound is only produced to determine the innocence of somebody accused of a crime, or to prove virginity or infidelity.

The rock is also claimed to make a noise on its own to signal a shipwreck or other type of disaster.

"A Pedra dos Namorados" is the only one of the rocks of A Barca whose mystical attributes are notrelated to the Virgin Mary legends. It resembles a chair with a high back and it is a place where couples swear their love and fidelity.