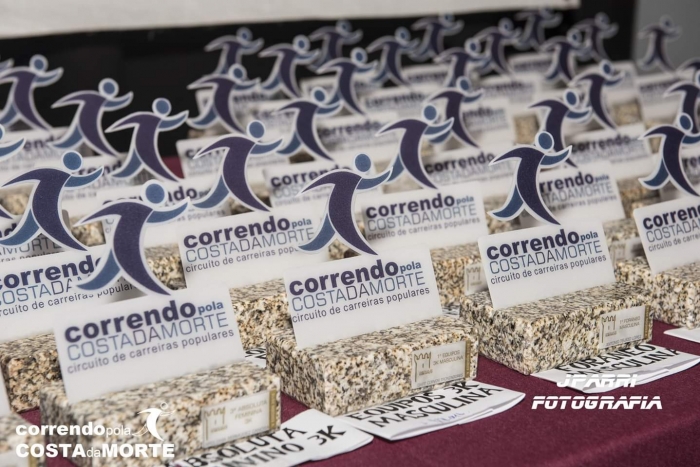 The 6th edition of the Circuit Correndo pola Costa da Morte closed this Sunday with a final race in Fisterra, scoring a record of participants (912). About half a thousand athletes came to participate despite the bad weather. Data such as this confirm the increase in the number of participants who are continuously producing in this annual Career Program, making it an important tourist asset. Not surprisingly, this circuit ranks second in the ranking of sports events with tourist potential in Costa da Morte, just behind the international and multitudinous Gran Fondo Ézaro, and followed by other events and sports events that are consolidated as inescapable events every year such as the Costa Abanca Circuit (Circuíto Travesía Costa Abanca), the Lighthouse Road (O Camiño dos Faros) and the Grand Trail Costa da Morte.

This latest event, promoted by AD Outdoor Sports, has doubled the number of participants in its second edition, with new features such as a new three-stage short trail, in addition to the classic seven-stage one. Another great news from their last edition, which has just been celebrated, was became a scoring test for the Mont Blanc Ultra Trail, the most important mountain race in the world.

Sports events such as these, and also another countless sporting events throughout the year, are already in themselves valuable boosters of the local economy, as well as important promotional displays of the landscape, activities and tourist services of the territory.

Aware of this, the CMAT have been working since 2018 to make this popularity in the sportive events of the territory translated into a greater tourist advantage, both in terms of profitability for the companies of the territory, as in a suitable positioning of the Costa da Morte as a destination of sports tourism. The program for the improvement of sports tourism on the Costa da Morte, which has been developed in collaboration with the Deputación da Coruña since 2018, is based on the design of different strategies that aim to break with the character of seasonality surrounding tourism, promoting the diversification of the sector towards this segment that is increasingly attracting market share. One of them is the initiative "Costa da Morte Turismo + Deporte", in which we worked collaboratively in designing a range of services and benefits for participants of sporting events, and to which were added twenty tourism companies in the area.

This program, which was launched as a pilot experience in three sportive events earlier this year, is now taking one step further, with the aim of expanding the companies involved in the promotions, and disseminating the offer among organizers and target audience. Companies interested in joining the promotions, which will be reflected in a General Dossier provided to the sporting event organizers in the region, can do so throughout this month through the following link, where they can also gather more information on the project objectives.

With initiatives such as this one, it aims to fulfill the objective of the Costa da Morte Tourism Action Plan 2019-2021 to make sports tourism one of its main segments, allowing the diversification of the sector and the de-seasonalization of tourism activity.